XTERRA Fitness FB150 vs FB350 Folding Bike – Which Is Better?

Choosing between the XTERRA Fitness FB150 and the FB350 Folding Bike is not as easy as it seems. Both fitness bikes support daily training with various levels of resistance. At the end of the workout, both of these bikes fold away for storage.

One of the biggest differences between the 2 recumbent bikes is their folded size. The bikes also feature different seats and different accessories. But at their core fitness training purpose, they are very similar. Here’s how they compare in detail. 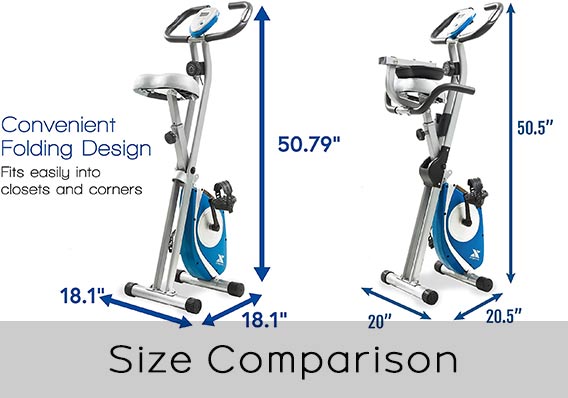 The size differences are small and they might not be a characteristic many users care about too much. An exception might apply to those who store the fitness bike in a closet or in tight spaces where the 2in in savings of the FB150 bike can make the difference.

However, even if the bikes have different sizes, they still both use reliable construction materials. The result of these materials is a high weight capacity of 225lbs on both bikes. While it might seem that FB350 is more robust due to its larger size, both bikes have the exact weight capacity.

Both bikes are powered by magnetic resistance. This type of resistance is known for its long-term use. It requires no maintenance as the magnet is unaffected by its flywheel proximity.

8 levels of magnetic resistance have been implemented on fitness bikes. However, these are not sufficient for anyone into serious training. Cycling professionals will not be able to get the most efficient workout they need out of these levels of resistance.

It’s the home user that’s going to benefit the most out of these magnetic levels of resistance. Furthermore, both bikes offer the type of adjustability which is suitable for the residential user. A plastic knob needs to be turned to increase or decrease magnetic tension and resistance. 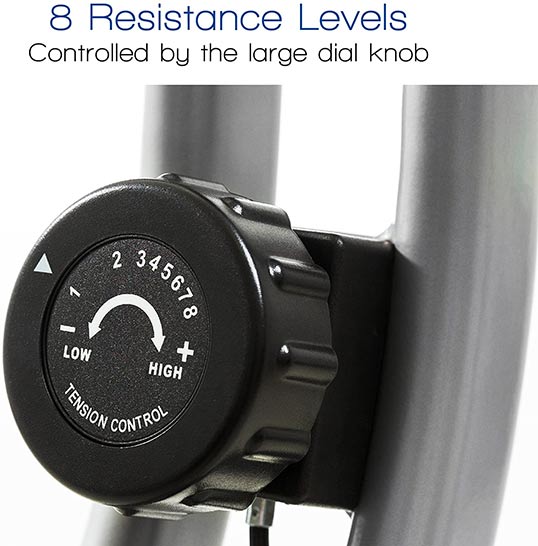 The comfort of a recumbent bike is given by its cycling position and by its seat. But the seats on these 2 bikes are different and they can be a good indication of the type of users they’re made for. The FB150 has an oversized padded seat while the FB350 has the same seat with an added backrest and multi-grip handlebars. 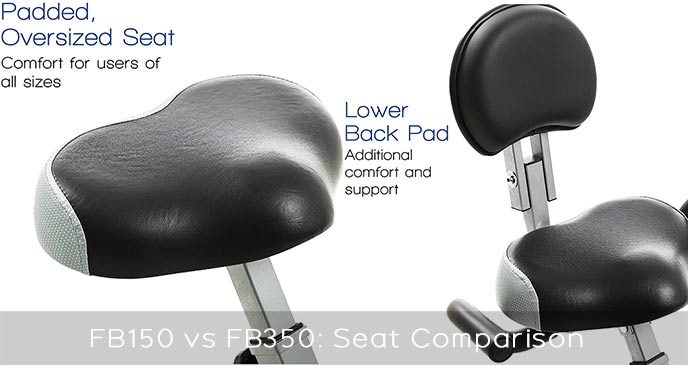 The cushioned seat of the FB150 is height adjustable. It fits users between 4’10” and 5’10” of up to 225lbs. Easy to clean and completely cushioned, the seat is comfortable. It provides the right platform for training in short or long cycling sessions.

One of the advantages of this seat is that it comes with no moving parts. This means that it can be a bit more durable by comparison with other seats which feature folding backrests as the one seen on the FB350.

But when it comes to the ultimate comfort and support, the FB350 is the best due to its large seat. With low back support, it resembles the classic recumbent bike design the most. It even features large handlebars to help users get in and out of the seat.

Its included low back support is what users need when facing issues of low back pain. But the seat is also useful to the elderly who need a bit more support while cycling. Fortunately, there are a few other options for seniors. The best recumbent bikes for the elderly all offer enhanced support and superior comfort compared to a performance seat or something professional cyclists would be comfortable with.

Both seats are anatomically designed. This means they offer good support in key areas. Unlike other recumbent bike sets, they’d don’t become uncomfortable even after cycling for more than an hour.

The FB150 has no accessories to count on for media players, smartphones, or water bottles. The FB350 has a small accessories pocket that may hold a smartphone. Useful to those who like to listen to music while cycling, the accessory pocket is easy to clean as it has a bottom hole as well. 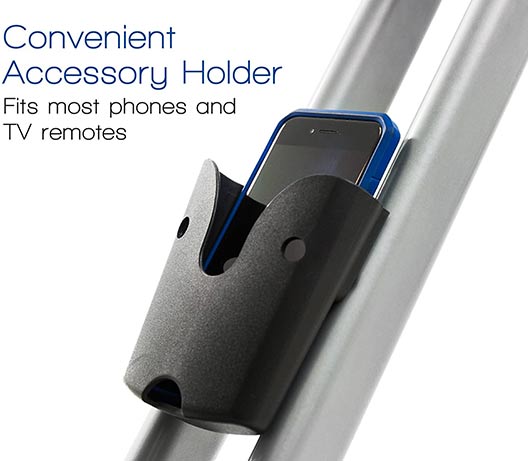 Unfortunately, both bikes are made without a water bottle holder. They could be better if they had a media tray as well. Some users prefer to surf the web on their tablets during long cycling sessions. Such accessories are not included on either of the bikes.

Xterra uses the same 2” X 1” display on both of these bikes. The digital display is not backlit and this can be an issue for many users who prefer to train at night. However, most people are cycling during the day when the screen is visible.

Speed is one of the variables shown on the display. It allows the users to point out the cadence of the cycling effort which is an essential variable in determining the exact effort put into the workout. Distance is also shown on the screen. It’s the type of data that indicates the miles pedaled by the user. Without having to worry about other variables, it can be the best workout indicator to assess effort. 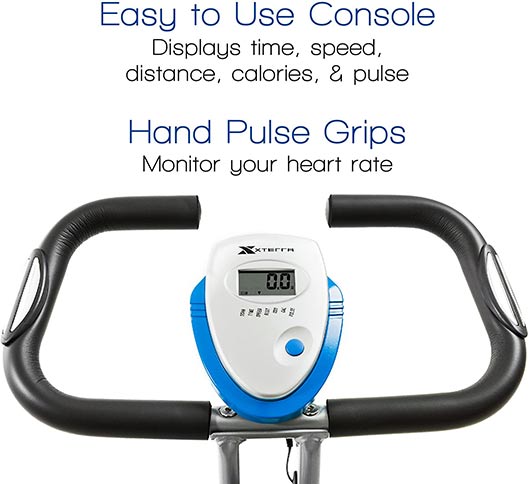 One of those variables is calorie counting. The amount of burned calories can be the best indicator shown on both bikes. Users can set their cycling objective of burning a few hundred calories on their bikes with each cycling session.

Both the FB150 and the FB350 come with integrated handlebar pulse grips. Made to measure heart rate, pulse grips are a good cardiovascular health indicator. They show the clear benefits of cycling for fitness.

Without pulse grips, it would be difficult to measure fitness progress in time. However, pulse measurement is very simple on these bikes. Users need to hold the grips for them to measure heart rate. There’s no chest strap compatibility as with pro-level alternative bikes.

The benefits of the FB150 and FB350 Xterra bikes 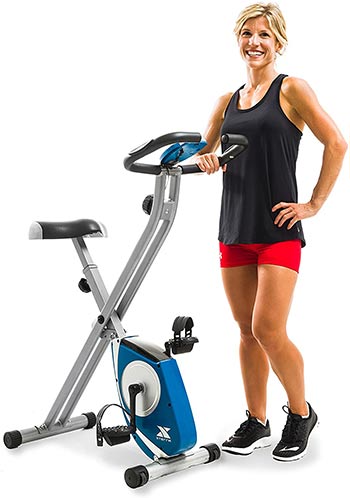 Both bikes can be useful if used correctly. But there are a few situations where they might need a bit of adapting, such as not having the highest levels of resistance for those with years of training experience behind them.

The drawbacks of the FB150 and FB350 Xterra bikes

Not everything is perfect with the 2 bikes. They might be practical, but they have their weak points as well, as follows.

How the FB150 and FB350 Xterra bikes compare to other exercise bikes?

In a direct comparison, Xterra fitness folding bikes are very similar to other leading bikes. But they fall short on maximum weight capacity. Here are a few viable alternatives.

Exerpeutic’s magnetic bike comes with a higher weight capacity of 300lbs. It also uses 8 levels of magnetic resistance based on folding frame design. But its advantage over Xterra’s bikes is the higher user weight capacity. The folding exercise bike is superior to overweight users.

Slim Cycle’s recumbent bike also comes with 8 levels of magnetic resistance. However, it’s a bit more modern with its large control panel with a larger display. But its main strength is the added resistance bands. They can be used for upper body workouts while cycling. Limited by the ability to train at home in tight spaces, the added bands offer a full-body workout on an exercise bike. However, this bike is not one of the professional levels either.

BCAN’s bike is very similar to the FB350. It includes a backrest and seat-side handlebars for added practicality. But it also comes with a higher 330lbs weight capacity. Overweight users might be tempted to use this bike instead, just for the extra strength and support of the bike’s frame.

Magnetic tension is unlimited on the bike. A large tension knob adjusts user’s efforts and it represents one of the most reliable options for custom resistance. It is not a resistance system that can be relied on by pro athletes either, as the bike is made for residential use.

Both Xterra’s bikes and those form Excerpeutic, Slim Cycle, and BCAN can be used at home. Since pricing is important when making a purchase, choosing the right bike is crucial to saving money.

For users under 225lbs, Xterra’s bikes are the right option as they even benefit from a folding design. Overweight users might need to look elsewhere to bikes such as the BCAN Folding Exercise Bike with its high weight capacity above the 300lbs mark.

Otherwise, the way in which these bikes are used is similar. Both the FB150 and the FB350 bikes come with simple use which allows users to lose weight or get in shape. For most users, the FB150 is sufficient to power workouts. The elderly or anyone going through a period of low back pain might benefit more from the extra-supportive FB350 folding bike instead.

X3 Bar vs Gorilla Bow – Are They Useful?