Kraftgun vs. Hypervolt: Detailing the Differences

Kraft and Hyperice are two of the industry’s leading companies for percussion massage guns.

In recent years, with the rise of healthy living and at-home fitness videos, massage gun sales have skyrocketed.

Not only that, but technology has continued to advance tremendously with every new model.

These now extremely portable devices may not be good enough to put a masseuse out of business, but they are just what you need to keep your muscles relaxed after a long workout or stressful week.

This equipment is built to reduce soreness, stiffness, boost the level of movement, and assist recovery.

What is a Massage Gun

A massage gun is a handheld electronic device that makes use of profound, powerful energy to carry out a vigorous massage on the body. Although the shape of the device is the idea behind it being called a massage gun, not all of them are shaped this way. Some of the older models have to be plugged into an outlet, but the newer models like the Kraftgun and Hypervolt have rechargeable batteries, making them extremely portable.

Massage guns carry out fast, straightforward, and deep pressure on a particular area of the body. Combating muscle and deep tissue problems are two of the main purposes of these devices. Another essential function is to reduce the time the muscle uses in recovering before or after an intensive exercise. This gadget also aids the free flow of blood to the muscles, thereby enhancing movement.

Based on the advantages associated with a massage gun, it has become a “must use” device among fitness experts.

Unique features of the Kraftgun

The Kraftgun was first produced in 2019, and the moment it hit the market, it was loved by nearly everyone that purchased it. Despite its relative newness, it is still one of the most popular massage guns out there. The popularity is partly due to the effort put into the marketing of the product. 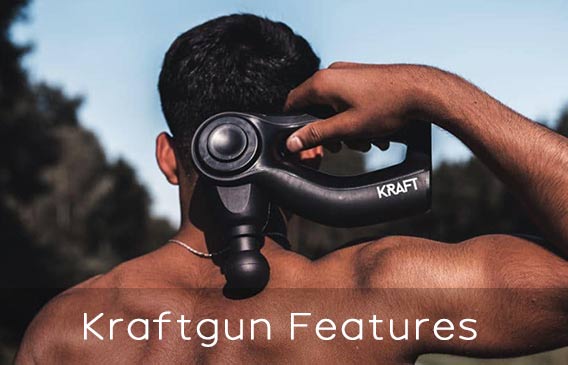 Like other massage guns, some of the functions of this gadget are to help in the circulation of blood to the muscle after being massaged, relieving the pain and stress brought on by exercise.

Being noise-free is at the forefront of the marketing of this product. However, in reality, this gadget produces about 65 dB of noise, which is relatively high. But due to the fact most massage guns now produce between 60-80 dB of noise, it is within a normal range so the company can get away with advertising the gun as “noise-free” because technically speaking, it is one of the more quiet massage guns on the market.

When considering the purchase of a massage gun, the speed and power it produces are inarguably one of the most significant factors to consider. The speed and power of this massage gun are outstanding. The 24v brushless motor produces a 16mm amplitude with a stall force of 66 pounds. The brushless motor can function at 30Hz, 25Hz, and 40Hz speed levels at a maximum level of 2,400 RPM.

Another important factor when it comes to speed and power is versatility, and the Kraftgun is versatile as well. The different speed settings correspond to the big and smaller muscles in the body so you can tailor your massage to the muscle you are massaging.

Despite all of the different functions featured in the Kraftgun, it is surprisingly lightweight, weighing in at only 2.2 pounds. It is a bit bulky in comparison to other guns like the Hypervolt, but it comes with a carrying case for easy portability. 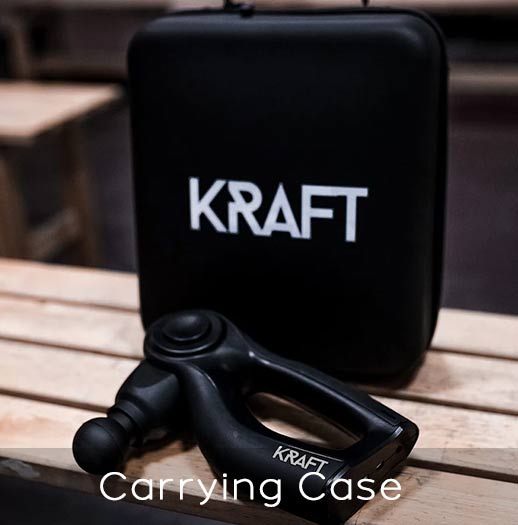 One standout feature of the Kraftgun is the battery. This device comes with a reliable, fast-charging, and long-lasting Samsung battery.

The device can last up to 4 hours on one charge, which contradicts its advert claims that it lasts up to 6-7 hours based on speed and usage. Regardless, the four-hour battery life is marketed to last you an entire month of massages, depending on how often you use it, of course.

The Kraftgun sells for around $369 without shipping charges; however, there is a price slash ongoing at the moment, with the massage gun pegged at $249 with free shipping.

The Kraftgun is considered the most popular massage gun on Google for a good reason, and this has a lot to do with its customizability. The gun comes with four different attachments as well as an adjustable head so you can reach even the hardest to reach places.

The gun is also made of a material that makes for easy cleaning and maintenance. You no longer have to worry about using the gun while you are sweating. Simply take a wet cleaning wipe to it afterward, and it cleans right up.

Another complaint from users is the customer care of the brand. A lot of people complain about getting their orders only after several months of waiting. Some express it was worth the wait because of how well it performs, while others were not satisfied with the delayed shipping.

On the brighter side, most users find it relatively cost-efficient when the performance is taken into account.

Pros and Cons of the Kraftgun

Unique features of the Hypervolt

Muscle soreness and stiffness are relaxed thanks to the advanced percussion mechanism used by the Hypervolt massage gun. Regardless of your level, fitness expert, or new exercise enthusiast, making use of this massage gun will give you a boost before you start your workout and aid recovery post-workout.

Due to the different speed levels, just shy of the highest offering at 3200 percussions per minute (PRM), one can decide the speed at which one wants to be massaged. For beginners, you should begin at the lowest level before moving up the ladder.

Some of the essential features of this massage gun are highlighted and discussed below:

Indeed at $350, one hopes to receive a high-quality product, and with this device, that is precisely what you get. It is lightweight, so you can use it without a lot of effort, weighing in at 2.5lbs.

The Hypervolt comes with a detachable, rechargeable battery that can last over two hours in a situation where it is being used at its lowest setting. That said, with a replaceable battery, you can carry around a second one for twice the battery life. However, it should be noted that to achieve a full charge, it takes nothing less than 5 hours.

The Hypervolt massage gun comes in basically two distinctive colors; black and grey. Another thing to watch out for is the LED ring. This ring is around the base of the battery, and it lights up whenever the power comes on to show the battery level. 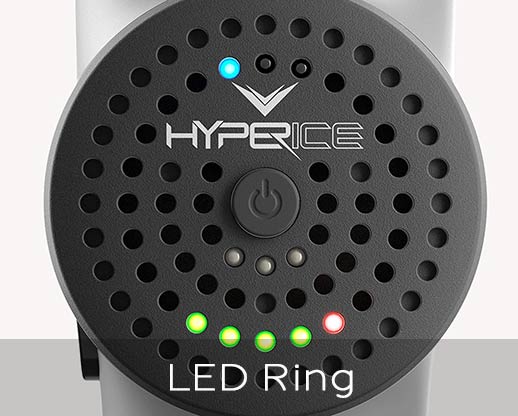 Most people who reviewed the Hypervolt have given credit to the manufacturer in terms of the reduced noise when compared to other massage guns in the market. This is achieved thanks to the use of the quiet glide technology to offer improved performance and variability while making minimal noise.

This device comes with a brushless motor with a high-torque engine and Quiet Glide™ technology that aids the three-speed motors to help you relax your muscles after an intense workout.

In a surprising move, the Hypervolt also comes with two power buttons— one is for the battery to make the gadget come on, while the other power button is on the unit to switch between the different speed modes.

One drawback of this massage gun is the lack of a carrying case, which costs extra to get.

On Bestbuy Online shop, this gadget has a total of 855 reviews, with 751 being five stars review. Most of the customers attested to the fact that the device recharges fast despite it being advertised as slow-charging. It is easy to use for athletes and non-athletes. Customers also certified that the ability to control the pace of the gadget is a standout feature of this device.

However, most of the negative feedback was as a result of the lack of a case for the device, a drawback most users described as a scheme to get more money by the manufacturer.

How to use it

To get value for your money, one should endeavor to stick with the manufacturer’s directive on usage. This massage gun is designed to work on various muscle groups, ranging from the calves to the pectoral muscles. Let’s imagine an individual who wants to massage his or her calves, the ideal way to massage is by initially sitting and oscillating the massage gun from the top of the calf to the Achilles. 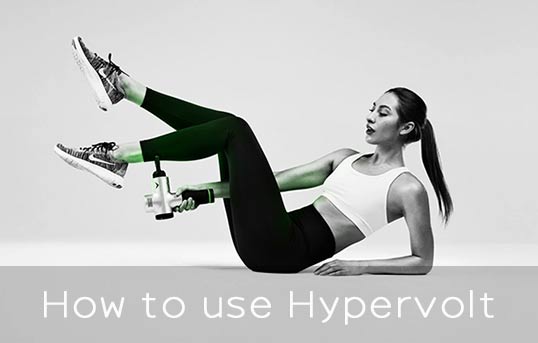 No matter what muscles you are massaging, the different speed settings and head attachments ensure you will get the job done right.

Pros and Cons of the Hypervolt

Kraftgun vs. Hypervolt Which Should You Buy?

The Kraftgun and Hypervolt massage guns are two of the top massage guns on the market, and they possess similar designs. Speed and stroke depth, otherwise known as amplitude, fall in the same category, thus making the two adequate percussion massagers. They both have high scores on the customer review table, and they are top-quality products.

Regardless of the similarities, some distinctive features set these two products apart. 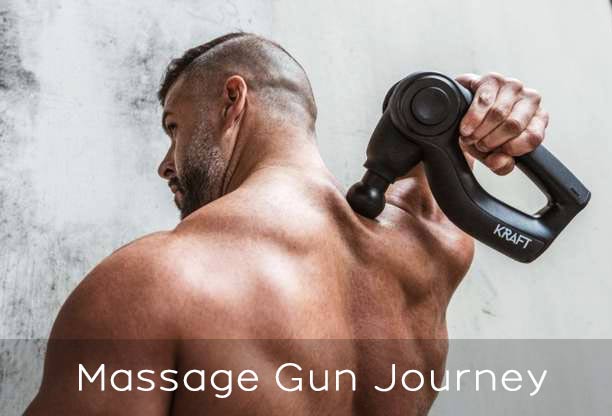 Are you looking to start your massage gun journey as soon as possible? If you are, the Kraftgun is undoubtedly not for you. At the moment, ordering a Kraftgun takes up to 7-9 weeks to ship. Whereas, the Hypervolt delivers in a matter of days.

Are you looking to purchase a massage gun on a budget? The Kraftgun is the relatively cheaper of the two massage guns being reviewed. Due to the long wait before being delivered, Kraftgun offers a significant discount off your purchase. On the other hand, Hypervolt is $350, and even with the $50 discount currently going on in some stores, it is still more expensive than the Kraftgun.

Similar Products in the Market

The Theragun G3Pro and the LifePro Pulse Fx are both exceptional percussion massage guns that can stand strong against the above-stated massage guns.

The Theragun is more expensive than any of the other three massage guns and it doesn’t offer as many features. When it comes to speed control, the Theragun makes you not want to massage your extra sore muscles because the lowest speed setting is still too rough. Other than that, battery life and adjustability make the Theragun G3Pro a suitable option.

The LifePro Pulse Fx is cheaper than the other three massage gun options and is structurally built similar to that of the Kraftgun. You can get this gun at nearly one hundred dollars cheaper than the Kraftgun. Customers seem to complain that the lowest speed setting of the LifePro Pulse is like that of the Theragun, it is too rough for extremely sore muscles. Unlike the Theragun option, the LifePro gun is quiet so you can enjoy an after workout massage without your neighbor thinking you’re using a drill.

At the end of the day, the Theragun and LifePro are both viable massage gun options, but when it comes to best value, they can’t compete with the Kraftgun and Hypervolt.

In performance and versatility, Kraftgun and Hypervolt have different features. The higher percussion per minute of the latter is one of the highest out there in the massage gun market, while the former is one of the lightest massage guns in the market, thus making it easy to maneuver.

Total Gym Fit Set Up – All you need to know

How to Get Body Beast Results In 90 days

Theragun vs Hypervolt: Which Massage Gun is Better?