Keiser spin bikes are known for their practical design. The rear wheel design protects the bikes from sweat and makes them easier to clean.

All three spin bikes are seen in homes and gyms. And they’re also used at home.

Those contemplating a purchase need to decide which characteristics are suitable for their personal fitness goals. 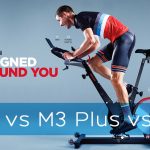 Similarities between Keizer M3, M3 Plus and M3i

Keizer is a well-known provider of exercise bikes. The brand’s M Series spinning bicycles are very popular among users.

The M3, M3 Plus, and M3i models are similar in appearance. They are all based on the same frame but can be distinguished by color.

These three models can help you get a great cardio workout.

The best part is that you don’t have the leave the comfort of your own home and can ride at any time.

All three models are designed for a smooth and quiet ride, so your workout won’t disturb your family.

You may have guessed about the differences between the M3, M3 Plus, and M3i just by the names alone.

The M3 is the original baseline model, and then the M3 plus, and finally the latest M3i model. The updated M3i product has all the latest and greatest features.

For example, the handlebars on the M3 can only be adjusted vertically. For some users, it may feel awkward and not fit their structure properly.

The big update of M3 Plus and M3i is that the handlebars can also be adjusted horizontally.

This improvement can help riders of all sizes more comfortable during their workout.

Furthermore, the “i” in M3i stands for smarter technology. The M3i features Bluetooth technology, which allows you to analyze and upload exercise data at any time.

You can capture all your cycling data on your Keizer bike and share it with other riders and friends.

If that sounds like something you’d like to do, then the newer and smarter model M3i can meet your needs.

The Keiser M3i bike comes with a V-shape frame. It uses a rear-wheel design and it has seen improvements over the years.

Among these improvements, the design of the crank arms and the pedals has seen the most work. It is here that Keiser implemented a design to fit all types of shoes.

Those using the bike at home know that spin shoes are not always the go-to option. If other bikes come with a narrow pedal distance, this has not been the objective of the M3i, which accommodates various types of shoes. 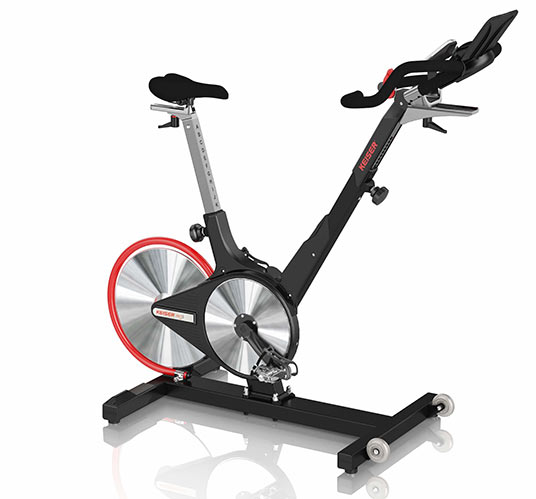 Adjustable resistance is also added to the bike. Together with this adjustability, users can rely on the Bluetooth signal for tablets and smartphones. Distance, speed, and cadence are among the signals measured and transferred to the app.

A media tray, stretch pads, and a water bottle holder is its accessories. They are not seen on the two other Keiser bikes.

This simpler bike comes without the media tray and the water bottle holder.

But it does include the same V-shape design. 4-way seat adjustability helps the user find the right cycling position.

Magnetic resistance is added to the rear wheel to simulate real-world cycling conditions such as going uphill or downhill.

This bike also comes with an improved pedal design. The M Series bike pedal is made to accommodate all types of shoes. This includes wide and cushioned bulky running shoes.

This was the first bike of the series. As a result, it had the least adjustability and versatility. But this bike still comes with the same V-style frame and a smooth ride.

Users still rate it highly for indoor home use as it’s silent by today’s standards. However, this bike is not easily available in stores as it’s out of production.

Here are 3 characteristics seen on the Keiser M3I, M3 Plus, and M3 bikes. They mainly relate to the versatility of the bikes.

The 4-way cycling seat is seen even on the M3 bike. Even if the Kiser M3 accessories are limited, the seat is still properly adjustable.

Users can move it to the front, to the back, up and down as needed. The same seat design is used on the two other bikes.

The seat locks in place by hand in all 3 bikes and users need no tools to adjust their position on the seat.

The magnetic resistance based on the belt drive system is adjustable on all 3 bikes.

The system works similarly to bikes seen in spin classes. The more the knob is turned, the harder it becomes to pedal.

This function is used both by beginners and by experienced cyclists multiple times during a cycling session.

Made with continuous design handlebars, all bikes allow cyclists to count on various grip points. These are important, especially for the long cycling session.

For example, those experiencing back pain might want to grip the handlebar closer to the body to reduce the pressure on the spine.

While Keiser M3i reviews show its full strengths as the best, these bikes have plenty of differences. Connectivity and adjustability are what differentiates them to the advantage of the M3i.

The M Series app is not available for the Keiser M3. It works for those who want to interpret their cycling efforts. While the bikes show cycling data, they can’t interpret it in the wider fitness context of personal health goals.

Bikes measure data such as cadence, calories, and trip distance. They show gear and cadence data in real-time. But this data doesn’t mean much outside the session itself. This is why an app such as Keiser’s app or Peleton’s app work to interpret this data further.

Users get to compare their burned calories to previous cycling sessions. This means that only the M3i allows users to see how they perform in efforts such as losing weight over weeks and months by tracking caloric consumption.

Heart rate measurements are also important. They track cardiovascular health and the measurements allow users to interpret how the body adapts to effort in time.

A media tray is only included with the M3i. There’s no media tray on the Keiser M3 Plus. Keiser M3i converters might be used to store smartphones or tablets, but they’re not included by default.

A media tray can be a helpful tool for those cycling at home. Watching a movie on a tablet is a method to stay on the spin bike longer.

And users can also read the news or browse social media with their smartphones on the media tray which also helps to stay on the bike longer.

The adjustability of the handlebar is a considerable issue that all users need to take seriously. Proper posture is needed for every cycling session.

The Keiser M3 doesn’t adjust the handlebar horizontally. This might not be a major issue when the seat is properly adjusted. However, those with the back issue might think otherwise. 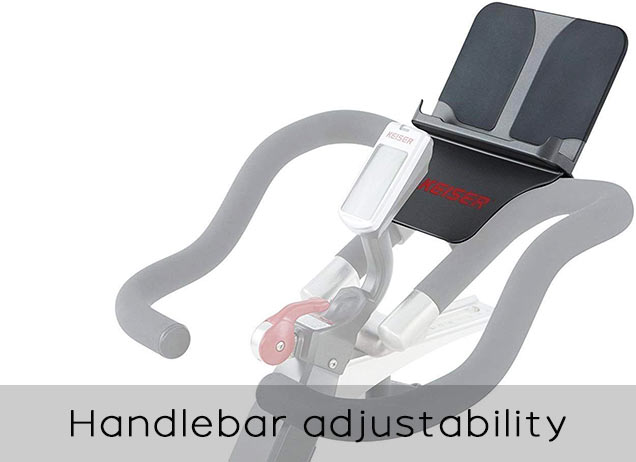 The Keiser M3i Lite and the M3i offer horizontal handlebar adjustability. This goes far when it comes to proper positioning on the bike.

For most users, it is a good opportunity to compensate for the 45-degree angle of the handlebar. It is also the right option according to users of various heights.

Those who want to use the bike with other family members should choose maximum adjustability to suit all heights, this includes handlebar positioning.

Keiser M3i vs M3 Plus vs M3 Bikes – rated by users

Every cyclist is different. However, there are a few areas where most agree on these bikes. Part of their strengths is seen across the M line. Mentioned drawbacks are typical to Keiser as a brand and not the bikes in particular.

Most users mention these 3 spin bikes look attractive. They might not win any design awards, but they impress with their overall modern aesthetics.

With many metal parts, the bikes feel durable. Users review them as high-quality in the conditions in which they don’t cost as much as some of their alternatives such as Schwinn bikes.

The seat and the handlebar are also solidly built, even if they are made with foam, plastic, and rubber on top of their metal frames. Most note the seat is very durable even when cycling every day. 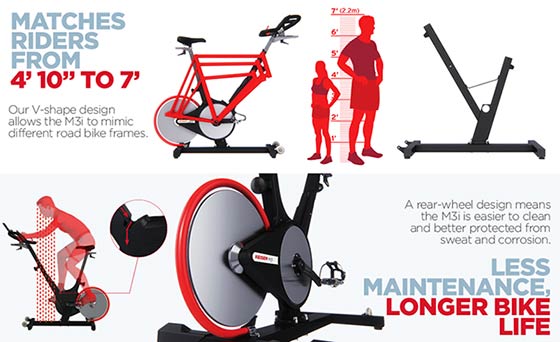 Many of these stationary bikes are used in small apartments. Noise levels are always going to be a problem with the neighbors in this case. But many users, not all 3 bikes are very quiet given their sturdy metal construction.

As a major advantage, this also works in other areas. For example, cyclists with kids can complete their morning routines without waking up the children. It is one of the main reasons why bikes generally get good feedback from dedicated indoor cyclists.

One of the areas which concern users as Keiser M3i and M3 Plus reviews show is with handlebar positions. They are not similar to road bikes.

However, experienced cyclists show the pedal design is not revolutionary as the manufacturer claims. The SPD clips and the cage design of the pedals have been around for years. This is why it may be false advertising from their perspective.

Life Fitness has a line of Lifecycle exercise bikes. But these are all recumbent bikes. The IC series which stands for indoor cycling is the comparable line from Life Fitness.

For example, Life Fitness makes bikes with drop handlebar positions, similar to aero bikes. It also has plenty of accessories for dedicated users such as multiple bottle holders.

The Keiser M series is one of the most affordable methods of getting into indoor cycling. While better bikes exist, the average user might not need anything else.

The M3i is the right option for the dedicated user. It comes with all the best features from the manufacturer such as Bluetooth connectivity. Its added media tray also makes it easier to live with every day. However, M3 Plus might be a balanced option for those who simply want to cycle.

The original M3 is slightly outdated and its limiting handlebar positioning makes it a hard sell. However, those who manage to still find it in stores might be getting one of the best deals for indoor cycling.

Total Gym Fit Reviews – Is It Right For You?

Smith Machine Squats: All You Need To Know